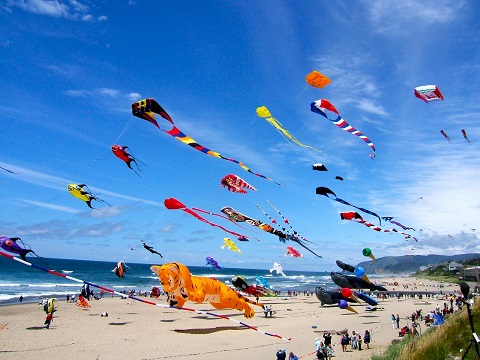 Having fun on the beach is part of life in Lincoln City and their Summer Kite Festival is the highlight. Featured on NBC, this massive festival includes kites as large as the balloons you would see in a Macy's parade, but wind fills their sails instead of gas. These showpieces include gigantic animals, cartoon characters and whimsical abstracts. The only limit is the kite maker's imagination.

You'll also see multiple kite fliers performing choreographed performances set to music. They dip and dive and the artistic routines, but don't underestimate the level of skill and stamina it requires, never mind the hours of practice.

There is also an area where kids can build their own kite, learn how to fly it, and frolic on the beach. Check their website for dates and details.