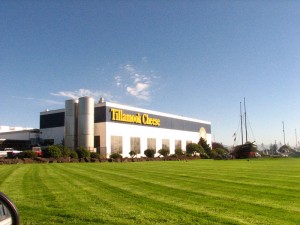 The Tillamook Cheese Factory is one of the oldest in the Pacific Northwest. Early settlers found the climate ideal for dairy cows, because the moist climate produces lush grass. By 1855, Tillamook residents already had a ship to transport dairy products to Portland and beyond.

Famous cheesemaker, Peter McIntosh brought his cheddar cheese-making expertise to Tillamook County in 1894. The area began to win awards and his original recipes persist to this day. By 1921, the slogan "Look for Tillamook on the Rind" was on cheese and the brand trademarked.

In 2010, Tillamook won the World's Best Medium Cheddar Cheese at the World Championship Cheese Contest. In 2014, they celebrated 105 years in business and they continue to offer a variety of quality dairy products unique to the area.